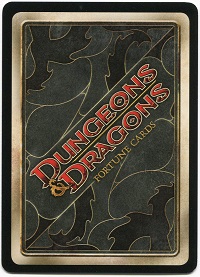 What Are Fortune Cards?

Fortune Cards were originally released by Wizards of the Coast to support the in-store D&D Encounters program.  These cards, sold in random booster packs, provide one-time (mostly combat) benefits to characters when cards are played at the table.  Originally intended to serve as a deck that a player draws from once per round, crafty DMs can re-purpose them as a reward mechanic in their 4th Edition D&D games.

Why A Reward Mechanic?

Many DMs like to reward players with something extra when they go out of their way to contribute to the fun at the table.  Some award extra experience points, others use bonus Action Points, still others grant bonuses to the next die roll.  Fortune Cards offer a fun mechanic for rewarding players in a unique and random way that ties in directly to 4e mechanics. Plus, if you have some around just gathering dust, you might as well get some use out of them.

To construct your reward deck(s), you will need to purchase some Fortune Cards. There were five different sets of card printed: Neverwinter, Shadows Over the Nentir Vale,  Fury of the Feywild, Spiral of Tharizdun, and Drow Treachery. You will primarily be interested in getting cards from the Neverwinter, Shadow Over the Nentir Vale, and Spiral of Tharizdun sets, as they are mostly setting/theme agnostic. Each set contains 80 unique cards: 20 designated as common, 20 as uncommon, and 40 that are rare. A standard booster pack for a set contains 8 cards made up of 5 common, 2 uncommon, and 1 rare. A handful of promo card were also printed for each set.

You have a few options as to how to acquire cards:

Depending on how many cards you have and personal preference regarding how you want to reward players, there are several ways to set up one or more reward decks for use at the table. I have presented several here, feel free to choose one that suits your play style best (or come up with your own). Regardless of which method of deck construction you choose, you should start by selectively weeding your pool of available cards.

Weeding Out The Duds

Ideally, you want your Fortunate Card rewards to be something interesting and fun that the players can use to gain a leg up in encounters. Since the full run of Fortune Cards covers a wide range of situations and effects, you will more than likely need to pull out those cards that won’t work in your game. Here are a few quick things to look out for:

Selectively pruning cards in this way will help to ensure that the Fortune Cards you hand out actually feel like rewards (or at least provide new and interesting options).

This is the easiest reward deck to construct: You simply gather all the cards you plan on using and put them in one shuffled pile. It’s fast and easy to set up, but you may find that drawing from it results in rewards that don’t often match the player’s contributions (for instance, a player may make a huge sacrifice but be rewarded with a common card with a small effect). Also, if you purchased just a complete set of cards, the ratio of common, uncommon, and rare cards will be skewed toward rares (sets contain twice as many unique rares as commons and uncommons). With a little more work you can make it into a deck of all unique cards, or play with the card ratios to affect the distribution of cards.

Constructing the reward deck such that it only has one copy of every card ensures that every reward you hand out, and every card that is played, is unique and different.

You can also construct a single deck but use the rarity of the cards to determine how many of each to include in the deck. This of course requires you to have many more cards, but if you bought them in packs or display boxes that shouldn’t be a problem. You can decide on whatever ratio you like, but here are two examples:

Again, the reward a player gets from the deck is random (in terms of how powerful it is), though in this case you are setting the power ratio of reward cards in the deck.

If you want more control over the power of the rewards you’re handing out, you can opt to create multiple decks sorted by rarity (e.g. a common deck, an uncommon deck, and a rare deck). When it comes time to hand out a reward, you choose which deck to pull from based on how great of a reward you think they have earned. You can use all of your cards, can make each deck contain only unique cards, or play with the ratio in each deck to control how many copies of a card are out at one time.

If you want duplicate cards at the table, but want to control the frequency of cards based on their rarity, do the following: In your common deck, include 4 of each common card. In the uncommon deck, include 2 of each uncommon card. In the rare deck include 1 of each card. Since you are determining the rarity of cards at the table by rewarding the players based on merit, these ratios instead control the likeliness that more than one person at the table gets the same card. Another formula would be to include 1 less than the number players of each common card, and half that number of uncommon, and one rare.

This method takes the most time and effort to construct the decks, but gives you the most control (and is my current preferred setup). Although the rarity assigned to each Fortune Card gives some sense of its power, it doesn’t always correlate with how good the card is from a player’s perspective. The play style of you and your players may make some cards better or worse than the rarity suggests. For example, a rare card that provides bonuses on opportunity attacks isn’t very valuable if, as a DM, your monsters rarely provoke attacks of opportunity. With that in mind, you can take the time to go through all of your cards and sort them into a few categories based on how valuable you think they actually are, without regard to rarity.

Here are the categories/decks I’ve sorted my cards into:

It should be pointed out that even though I sorted the cards based on usefulness, I still tried to make sure that all of the cards were useful in some way, there are just some that provide a better benefit than others.

The Fortune Card sets Fury of the Feywild and Drow Treachery are generally not well-suited for inclusion in the reward decks because of their themes and mechanics–magical effects in the former and “harm another character” in the latter–though one could cherry pick a few here and there. However, they could be used as their own special reward decks if they meet the theme of your game (an evil drow campaign, for instance).   The Fury of the Feywild set contains many magical and unusual effects which are not well suited for all classes, but could make interesting rewards for magical or fey characters in your game. And of course if you’re running an adventure in the Feywild, you could give these rewards to any character, explaining the effect as being tied to the environs. It probably isn’t worth the time and effort to sort these themed decks into multiple ones based on rarity. Instead, choose one of the methods above for creating a single deck instead. The randomness of the draws fits with the flavor of the deck.

Now that you have a deck or decks from which to draw cards, here are a few rules for using them in play. You should modify these in any way works best for your game.  Note that we are disregarding the standard rules by which Fortune Cards were used during D&D Encounters as we are re-purposing them to fit our needs.

When a player has earned a reward, draw a reward card from one of your reward decks and hand it to them. If you are using multiple decks, choose the one that best reflects how powerful a reward (or whatever criterion you’ve used to sort your decks) you think they deserve.

The player that receives the card can immediately choose to:

Rule 2 can be explained in-game as the receiving player emboldened or awed by the deeds of their fellow adventurer. As a game mechanic, it allows players to spread out rewards among the party and help their allies, or distribute rewards to players who could best use them.

During play, the following rules apply:

What Earns A Reward

It is up to you as the DM to decide what your players have to do to earn a reward. There isn’t a right or wrong way to do this. Here are a few actions in and out of the game that you might consider worthy of a reward. If you are using a rarity scheme, it’s up to you to decide what their effort is worth:

This is just a small list of examples to get you thinking about rewards, but ultimately it’s easier than following a list: just go with your gut.  Any time you feel like someone at the table deserves a little something extra for whatever reason, hand them a card.

This is by no means a perfect or be-all and end-all solution to player rewards.  Here are a few things to note: