Kill It With Fire

This tip comes courtesy of my DM, @WolfSamurai who in turn got it from his DM, @DMSamuel, and is a quick and easy way to engage your players.  When a player character kills a monster, instead of describing its untimely end yourself, turn to your players and say, “Tell me how it dies.”  Passing off this small bit of narrative to the players empowers them, allowing them to roleplay their hero’s triumph, and revel in the gory (or whimsical) details.  You’ve also offloaded a small part of your already tremendous workload, freeing up some mental bandwidth for more important tasks (like rallying your minions to show those pesky PCs who the king of the dungeon really is).  You will probably want to save the narration of your unfortunate villain’s fate for yourself, but your players will likely find being handed some narrative control is rewarding and fun.  Little things like this help engage players, allowing them to feel more immersed in the action and more like active participants in the story rather than passive bystanders. 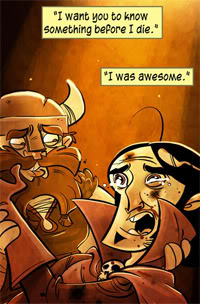 For me, playing boldly means a few things. Most importantly, it means coming outside your play style comfort zone and having your character do interesting things. It’s really scary, I know. D&D doesn’t have save points and there is always an underlying risk of character death. But the truth is, I’m not some heartless computer adjudicating the rules exactly as written. And the players aren’t some sort of kill bots looking to rack up the most damage possible against the big bad guys. (Well maybe they are, but that’s a different story.) Doing the same thing week after week, using the same powers in the same way, over and over again, makes for a boring game. I can try my best to shake things up by adding different challenges, but if the players approach them the same way, then I’ve accomplished nothing.
Besides, it’s these moments of vulnerability, of epic wins and epic failures, that make for great gaming stories.

This is great advice for any player, but I think it’s also something to keep in mind as a DM.  The responsibility of running several monsters at a time, encounter after encounter, tends to make it easy to fall into a rut.  The monsters fire off their powers, and maybe take advantage of a tricky ability, but then resort to whatever their best attack is.  Repeat ad boredom.

Maybe you have really clever tactics written down for the enemies in each of your encounters, but I can honestly say that so far in the campaign I’m running I haven’t made a monster do anything remotely “bold”.  I mean, I’ve had a few notes here and there suggesting some interesting actions the monsters can take, but they usually rely on very specific circumstances and get forgotten in the heat of the moment.  It’s just so much easier to choose a power or attack, roll the dice, and move on.

But if I don’t want my players to always take that approach, then neither should I.

Sure, risky and daring actions are the purview of adventurers, but why should they have all the fun?  I’ve littered encounters with all sorts of dungeon dressing in the hopes that the PCs will do something fun with them, but if they’re not going to then the monsters deserve the chance to improvise. Of course, your average dire rat isn’t that clever, nor your average goblin brash enough, but tougher, smarter, more cunning foes just might be.  What better way to encourage bold and interesting play from the players than to have their foes show them how it is done?

Just as the players won’t be able to show off their daring heroics every encounter, neither will their foes always assault them with risky and cunning gambits.  But when they do, it may turn an average encounter into a legendary one.