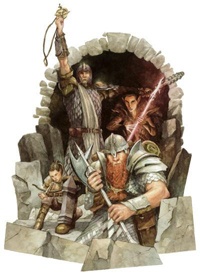 The following is a humor a piece I wrote for the awesome Hawty McBloggy in November of 2009. I have reprinted it here for posterity. Enjoy.

Outside the sky is dark and gray, and thunderclouds loom as if portends of doom, lightning momentarily illuminating the eerie landscape. But no one can tell here in the dark, foreboding dungeon. Only the flickering of torchlight and the wizard’s light spell dares pierce the inky blackness; only the occasional drip of water and the party’s heartbeats pounding in their ears can penetrate the silence. The brave adventurers battled their way through the Crypt of Blood and stand now before the tomb of the powerful Under Lich. The Heroes of Nerrath assemble: the brave dwarf fighter Stonebrow, master of the axe; the powerful elven wizard Varis, skilled in the arcane arts; the wily halfling rogue Finian Underfoot, pickpocket extraordinaire; and the pious human cleric Redgar, servant of Bahamut.

“Oh my god, you guys are SO GAY,” interrupts the uncouth half-orc.

“Shut up, Eric, the Dungeon Master is setting up the adventure!” shoots back Redgar in hushed tones.

While exploring the dangerous crypt, the adventurers rescued a half-orc barbarian who had been taken prisoner by the priests of the great Lich…

“Taken prisoner?” asks the half-orc, incredulously. “More like kicked-their-asses.” He flexes a bit in a display of irrelevant machismo. “I probably let them think I was their prisoner so I could get all up behind them and be like ‘pap pap pap!’ no more evil cult dudes!” The last bit he punctuates with an anachronistic two-fingered gesture.

Whatever. Fine. The adventurers were joined by a half-orc barbarian from the Stolian Wastes, a loner with a troubled past, who calls himself Skullcrusher.

“That’s not my name,” insists the half-orc.

“Heh, yea!” he chuckles, looking around at his companions who stare back at him with a mixture of disdain and unease.

The heroes find themselves at the entrance to the tomb of the powerful Under Lich.

“Why did we invite him again?” asks Varis, impatiently.

“Cause he’s my brother, and none of his buddies are online so he was bored,” explains Redgar, embarrassed. “C’mon, Eric, don’t be a dick.”

Ahem. The Tomb of the Lich awaits the adventurers.

“I’ll say a prayer to Bahamut, asking for his blessings in battle,” responds Redgar, placing his hands together in the universal symbol of prayer.

“I’ll sneak up to the door to have a look,” says Finian Underfoot, inching along the wall.

“I will cast silence so that he can’t hear our approach,” says Varis, waving his arms about, and punctuating the word “silence” while staring daggers at the half-orc.

“This is a crypt?” asks the half-orc, gesturing about. “It’s just a bunch of squares. Why are the walls blue? And what’s that supposed to be, a pillow?”

“The black pen stains the battlemat, so we have to use blue,” explains Stonebrow, readying his axe.

“And that’s not a pillow, that’s supposed to be the Lich’s sarcophagus, but the ink smeared a bit,” adds Finian, with a hint of disappointment.

“Okay, whatever,” says the half-orc impatiently. “I’m gonna go fuck this guy up.”

“Wait, don’t!” exclaims Varis the elf, reaching out to stop the burly barbarian.

The half-orc raises his fearsome double axe (“Of awesomeness!”) and rushes across the doorway. Unfortunately, he is oblivious to the Glyph of Warding trap just beyond the threshold.

The trap is sprung and magical flames issue forth from the mystical runes on the floor. The fireball engulfs the half-orc, and he is badly hurt–bloodied, in fact. The Under Lich is distracted from its evil ritual and howls at the adventurers. The heroes hope to gain initiative…

“I’ll probably be last,” a disappointed Stonebrow adds. “I got a 6.”

“You can’t have a 40, you’re just a stupid barbarian,” whines Varis. “Finian Underfoot is clearly first.”

“No way, I’m way faster than that stupid Hobbit,” says the half-orc, beginning to stand.

Whatever. He can go first. He’s new. It’s fine. The barbarian charges through the doorway, emerging from the other side of a wall of magical fire. And?

“Like I said, I’m all up in his business,” the half-orc answers, impatiently.

He swings his mighty double axe and…

“What are you looking at me for? Am I supposed to roll something? Like all these dice?” He looks confused. “Okay… I’m awesome.” Somewhere the sound of many small polyhedrons dancing across a table is heard. “I got like 30. I wasted him.”

The barbarian swings his mighty axe but is unable to hit the wicked undead lord before him.

“What? No way, I totally fucked him up!” The half-orc pretends to stand over the Uber Lich, repeatedly crouching and standing.

The Lich’s dead eyes glow with an unholy light. He levels his bony hands at Skullcrusher (“Skullfucker!”) and a blast of necrotic energy hits him squarely in the chest. The half-orc yells in pain and falls to the ground… dead!

“Oh my gods,” exclaims Finian, a look of horror on his face.

“The Under Lich has felled the barbarian!” adds Varis. “He’s too powerful!”

“Whatever, what’s my respawn, like ten seconds?” asks the dead half-orc.

“What? That’s queer!” scoffs the dead barbarian, still hissing with necrotic energy. “Whatever, I’m getting something to drink.” He stands and walks away, the scent of burnt half-orc hanging in the air.

The evil undead lord turns his gaze now upon the remaining companions, who stand in awe, having just watched their comrade smote by his powerful magic. What will they do now?

“I’m going to ‘Do The Dew’,” says a disembodied voice. “Taking one from the fridge, brah.”

“I never run away from a fight, but this undead abomination may be too much for us lads,” admits Stonebrow the dwarf, in an unconvincing and muddled Scottish/Irish accent.

“I concur, we should flee with great haste,” agrees Varis the elf quickly, turning to leave.

Redgar the cleric looks around at his companions and sighs, pleading with them, “Guys, we gotta go grab Skull… effer. We need to take him to town and see if someone can resurrect him.”

The Under Lich utters words of unholy power and skeletons begin to claw their way up from under the crypt floor.

“And I heard something about Cool Ranch Doritos,” calls the disembodied voice again, amidst the a strange cacophony of sound, not unlike cabinets roughly opening and closing and pots and pans rattling. “I wanna crush a bag, where they at?”

If the half-orc had been paying attention earlier, he would have heard that rations are available on the table in the kitchen. Not that he put any gold toward their purchase or anything.

“But, we’ve got all this treasure,” interjects Finian the rogue. “We can’t carry him and the loot!”

“I know guys, I’m sorry.” Redgar braces himself and wades into the sea of skeletons to grab the body of his fallen comrade. “Maybe we can come back for it.”

“But the door to Temple of Blood only opens during the Blood Moon, once every three fortnights!” complains Varis the elf, watching as his companions quickly shed the various treasures they had fought so hard for and follow Redgar into the crypt.

“God, you’re such a pussy,” calls the disembodied voice again, between crunching sounds. “You should have been called Vulva!”

“You’re a vulva,” mutters the wizard, reluctantly joining the fray and aiding his comrades in rescuing the body of the fallen half-orc, for reasons he can’t quite comprehend. The battle is pitched and the heroes themselves barely make it out alive, expending the last of their resources to escape in one piece, chased through the catacombs of the Temple of Blood by an army of skeletal warriors. But they do escape, managing to seal the doors behind them, collapsing in a heap.

“You guys still dorking around with that Udder Lick that I fucked up?” The crunching had stopped and the disembodied voice was now coming from the half-orc’s corpse.

“C’mon, let’s get this over with,” sighs Redgar the cleric, saying a few prayers to keep the body of his comrade from stinking too much as they drag him back to town many miles away. The road is long, arduous, and slow going. The scenery slowly crawls by and the effort of dragging a couple hundred pounds of dead weight exhausts the companions. Finally, the town of Glennhallow appears over a rise like a shining beacon to the downtrodden adventurers. The guards at the gate see their predicament and usher them in without hassle, knowing that if they tarry long it could be too late. The four companions make their way to the temple of Avandra, hoping that the acolytes there will know a ritual that might bring the fallen barbarian back from the realm of the Raven Queen. As they approach, a sister of the order of Avandra rushes out to meet them. “My dear heroes,” she exclaims. “What evil hast befallen you? Come inside, we must…”

Redgar sighs yet again. “We can move this along, I guess.”

The party meets with the woman and she says she can resurrect him. They perform a ritual. He springs to life.

From somewhere, a strange ringing is heard.

“Hello?” says the formerly dead barbarian. “Yo, this is Eric.”

“The ritual was a lengthy one, and used most of what little resources our order has,” says the sister, ignoring the annoying ringing that, again, had someone been paying attention, would have been set to vibrate. “I must ask for compensation in exchange.”

“Of course,” Redgar says, “How much must we donate to repay this boon?”

“We brought your friend back from the brink. We’d need at least 1,000 gold pieces as ‘payment’ for our services.’

The adventurers look around the table at each other.

The dwarf shrugs. “I’m wearing most of my loot.”

The rogue nods, “Yea, and I bought the last round of healing potions and this cloak I’m wearing.”

They both turn to the cleric. “Look, I know he’s my brother but… I spent most of my gold on rituals and components. I’m tapped.” The three look to the wizard who has been strangely silent. “You know, Varis, I haven’t seen you buy any gear in a while. You must have a few gold tucked away.”

Varis the Elf feigns ignorance, looking at his nails, before snapping at his companions. “C’mon guys, I was going to buy a +1 Staff of Storms and rain down thunder and lightning. It was going to be so cool!”

Redgar slaps his wizard friend on the shoulder, “C’mon, man, you’re the only one with the coin.”

“Fine!” shoots Varis. “This sucks. Here, take it, take all of it.” He throws a sack of coins at the Sister of Avandra’s feet.

The half-orc stands up. “My clan’s online,” he says, furnishing a coat from seemingly nowhere and slipping it on. “I’m outta here, gotta go do some real gaming. Modern Warfare 2, baby! Peace!” And with that the half-orc barbarian, known to his friends as Skullfucker, strode from the Temple of Avandra in the town of Glennhallow and disappeared, perhaps forever.

“Modern Warfare, psh,” dismisses Stonebrow the dwarf, as the wizard Varis walks away mumbling about his precious staff. “I’d rather a sharp axe, a strong shield, and a party of true adventurers any day, right laddies?” His accent is somehow less muddled, and almost convincing.

“God dammit,” cries the voice of Varis, a beacon of sorrow. “He ate all the Doritos!”